Two Airbus A380s made a dramatic tandem flight Sunday over the Sydney Harbour Bridge to launch the new Qantas-Emirates partnership, hailed by the Australian carrier as a “seismic shift” in aviation.

The tieup, approved last week by Australia’s competition watchdog, allows the two airlines to combine operations for an initial period of five years, including coordinating ticket prices and schedules.

It will also see Qantas switch its hub for European flights from Singapore to Emirates’ Dubai base as it attempts to turn around its struggling international business.

“Dubai is the best hub for Qantas in the 21st century,” the company’s chief executive, Alan Joyce, said after watching the flyover by superjumbos from both airlines at 1,500 feet (450 meters) over Sydney’s famous landmark. “It is eight hours’ flying time from 75 percent of the world’s population.”

“This is one of the biggest days in Qantas’ 92-year history. That’s because this partnership will play a critical role for us into the future,” Joyce said. “This joint network with Emirates is a key part of tackling the structural challenges that Qantas International is faced with. But more than that . . . it is a seismic shift in global aviation.”

Qantas said the feat by the two superjumbos is thought to be the first time anywhere in the world that two commercial airline A380s have flown in formation.

The alliance is seen as vital to the sustainability of Qantas, which last year posted its first annual deficit since privatization in 1995 due to tougher competition and high fuel costs for its international arm.

With services to Asia no longer tied to onward links to Europe, Qantas has said that it is also considering new direct destinations from Australia, including Beijing, Seoul, Mumbai, Delhi and Tokyo-Haneda.

Comet PANSTARRS and a new moon

On March 12, 2013, Comet PANSTARRS was aligned with a very new moon and slid towards the horizon together. This timelapse shows frames captured every 5 seconds. From my home near Santa Fe, New Mexico.   By Michael Zeiler

Sukhoi SuperJet 100 Getting Ready For Interjet

Airbus A350 almost ready for testing

Airbus has switched to nickel-cadmium batteries, in the wake of the problems which grounded the Boeing 787 in January, to reduce the risk of delaying the program. 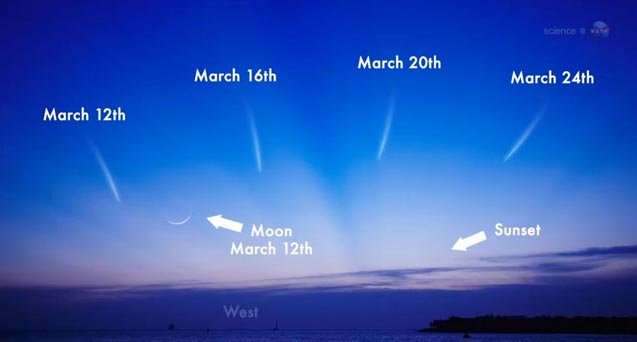 Image above: For those in search of comet L4 PANSTARRS, look to the west after sunset in early and mid-March. This graphic shows the comet’s expected positions in the sky. Image credit: NASA. Discovered in June 2011, comet 2011 L4 (PANSTARRS) bears the name of the telescopic survey that discovered it — the less than mellifluous sounding “Panoramic Survey Telescope and Rapid Response System” which sits atop the Haleakala volcano in Hawaii.

British Airways – A glimpse inside our new A380

Posted by daremen on March 6, 2013
Posted in: Aviation. Tagged: A380, Airbus, aviation, transportation. Leave a comment